Asthma creates difficulties in breathing for millions of people across the world. Symptoms include coughing, wheezing, and chest stiffness. Asthma may be acute or chronic. For one to glean what causes asthma and its symptoms, it helps to know how the airways function. These tubes carry air into and out of the lungs. For asthma patients, the airways inflame. This makes air tube swollen and extremely sensitive. Because of this, they tend to react to substances the person inhales. The reaction of airways makes the muscles around them to tighten. This narrows the trachea allowing little air to pass into the lungs. The swelling may worsen making the airways narrower than before the condition. Cells in the airway tend to produce more mucus that when a person does not have asthma (Holgate, 2011). This further increases the narrowing of airways. The chain reaction results in asthma symptoms. This paper will analyze the symptoms and factors that impact on asthma. The paper will also discuss the pathophysiological mechanism of chronic asthma and acute asthma exacerbation.

The pathophysiology mechanisms of chronic and acute asthma exacerbation are complex and involve airway inflammation, intermittent airflow obstruction, and bronchial hyperactive responsiveness (Huether & McCance, 2012). Asthma is an inflammatory illness that involves a range of cellular and cytokine mechanisms of tissue destruction. Sometimes the inflammations of bronchial wall cause sudden death in patients of asthma. This is usually in severe cases where the inflammation prevents air from reaching the lungs resulting in a patient’s sudden death. Asthma exacerbations refer to exaggerated lower airway reactions to substances in the environment. Respiratory virus is the most common form of substances in the environment that cause asthma exacerbation. Airways’ inflammation is a significant part of the lower airway response to asthma exacerbation. This comes together with airflow obstruction and increased airway sensitivity. The pattern of inflammation varies depending on the factor responsible for the exacerbation. Health specialists are yet to identify the actual reasons for exacerbated airway response.

Analysis of arterial blood gases patterns during an exacerbation is helpful in asthma management. During the first stages, of an exacerbation arterial blood gases show mild hypercapnia, hypoxemia and respiratory alkalosis. If the situation lasts for some time, there may be some compensatory renal bicarbonate secretion, which manifests as a non-anion-gap metabolic acidosis (Huether & McCance, 2012). As the severity of airflow obstruction increases, arterial carbon dioxide (PaCO2) first normalizes and subsequently increases because of patient's exhaustion, inadequate alveolar ventilation and/or an increase in physiologic death space (Pauwels, et al, 2012).

Several factors affect the pathophysiology of both chronic and acute asthma. Behaviors of people are a major influence on the pathophysiology of asthma. Behaviors such as smoking exercising trigger the disease. This is because such behaviors increase the chances of developing lung infections and breathing disorders. Smoking tobacco leads to lung problems and trachea issues. This reduces the amount of air that reaches the lungs and as a result, aggravating asthma. Lack of enough air getting into and leaving the lungs is one of the causes of asthma. Lack of exercise on the other hand, encourages the development of a layer of fat in the body organs including the airways. This narrows the airways and as a result, reduces air entering the lungs. Diagnosing asthma especially because of the behavior factor is tricky. One has to rule out any other cause and symptoms (Rees, Kanabar & Pattani, 2012). This will involve asking the patient about his background to ascertain that asthma is not because of genetic factors. Ask of the symptoms to determine the level of severity and then rule out any other possibility. Patients of asthma have different symptom pattern, which makes it difficult to identify the condition. For exercise-induced asthma, such people will develop asthma after rigorous exercises. The doctor can prescribe medication to ease the tightening of airways before exercising. For smoking, the best prescription is to stop smoking and use medications that eliminate the urge to smoke (Barnes, 2008).

Below are acute and chronic asthma mind maps. The mind maps show the epidemiology, pathophysiology, and diagnosis as well as treatment options of the two diseases. 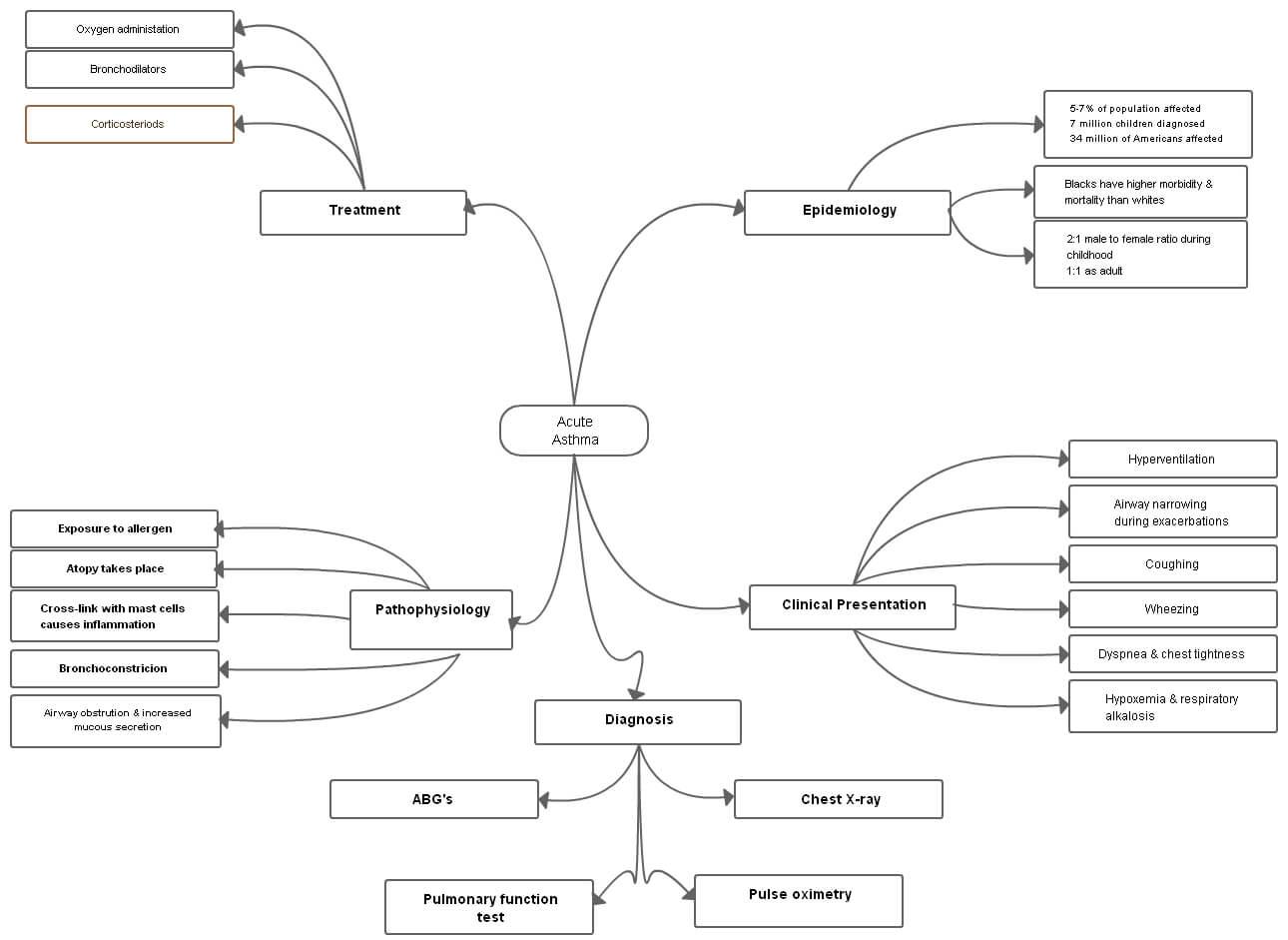 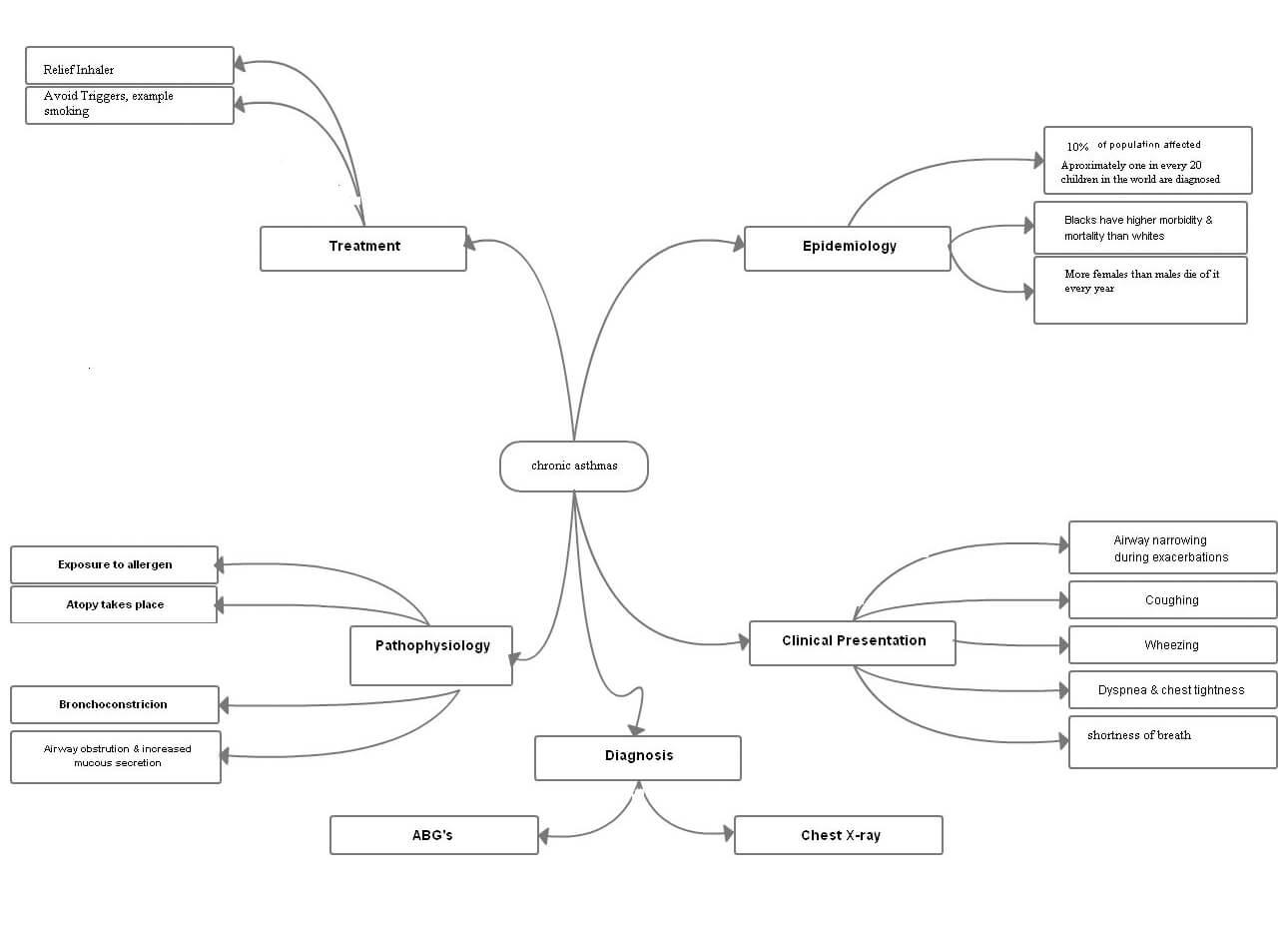 In conclusion, asthma kills many children and adults every year throughout the world. This makes it essential for one to understand the development, causes, and diagnosis of asthma. The fact that health practitioners do not know of any cause of the disease makes it difficult for them to treat it. The symptoms also differ from patient to patient further aggravating the situation.